Last night might have all but signaled the end of England’s World Cup dreams for another 4 years, yet for those of you who followed our Free World Cup Football System and backed Uruguay at odds of 3.80, there was something to be cheered with last night’s result.

As the table below shows (which is based on our system), there was 31.5% value in backing Suarez and co at such a big price, along with further bets on both Colombia and Greece to ensure another profitable day. 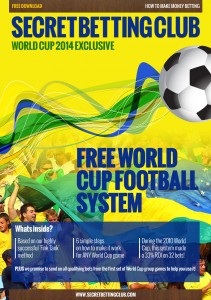 This continues what has been a very strong start to the World Cup for our free system with other winners including Mexico at 2.37, Costa Rica at 9.00, Holland at 5.22, USA at 3.02 and Chile at 6.50 to name just 5 successful bets.

It is unlikely this very high ROI figure will continue throughout the World Cup but at the half-way point for the Group Stages, we are sitting very pretty.

Qualifiers For The Next Few Days

For those of you keen to follow the system yourself, below you can find the qualifying bets for the next few days, where there are 13 value bets from the 14 games due to be played. The only game with no effective value is Cameroon vs Brazil, where the hosts offer just an 0.8% edge at the very short odds of 1.13. Thus I wouldn’t recommend this as a bet.

Please note the value in the Switzerland – France game is on the draw at odds of 3.75 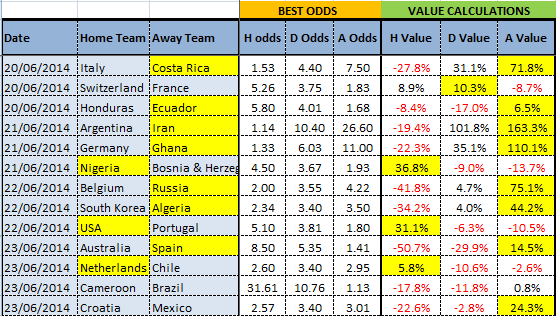 Given the success of this system in recent days a number of you have been emailing to ask a few questions about it, so I thought I would share my answers below…

What should I do when there is value in both a team to win and the draw?
This happens quite often, especially when the system highlights value on a big priced team. In terms of our official records, I back the highest value rated outcome, but there is plenty to be said for also backing the draw via the double-chance market, where you can often get

Should I factor in any ‘home-team’ bias for South American sides?
This is a very good question as the system does allow to either select ‘neutral’ fixtures, which we have applied to all games except Brazil. Having watched the tournament, many other South American sides such as Argentina, Chile or Uruguay also have played in front of plenty of their own fans, creating a near enough ‘home’ atmosphere in their fixtures.

With this in mind, there is certainly something to be said for factoring in home bias on South American sides other than Brazil. For example, Iran would only have a 9.9% chance of beating Argentina if playing on neutral territory, yet if played on Argentinian soil this drops to 6.4%. The knock-on effect in terms of their betting value would drop from 163% to 70.2% – more than halving the recommendation. My suggestion would be to apply some weighting to this home factor for all South American teams, especially where the value is borderline.

Does this system just pick outsiders?
No, that is a common misconception as whilst the highest proportion of bets is on the larger priced teams, there have still been plenty of value calls for the favourites. For example we have had Brazil to beat Croatia, Chile to beat Australia, Russia to beat South Korea and Spain to beat Australia put forward so far. This system will often surprise with its value suggestion – its not always the outsider!

Is it worth using the Asian Handicap market when backing a big-priced outsider?
Yes, I certainly feel that is the best approach in certain games such as Iran vs Argentina, where they are ‘officially’ offering over 100% value at the odds of 26.60, but realistically we all know its unlikely to come off. Even our system rates them as having just a 9.9% chance so still expects them to only win 1 out of 10 times (possibly less if factoring in some home bias for Argentina).

In this instance it is often better to back the likes of Iran and others in the Asian Handicap market. You can choose one of two options – take either the Double Chance market on Iran (you win as long as Iran dont lose) where they are as big as 6.50 or alternatively play the +2.25 Asian Handicap market at odds of 1.96.

Similarly, if backing a short-priced favourite (Spain to beat Australia) you might also like to back them to overcome a handicap to improve the odds you take.

World Cup Fever has well and truly taken over at SBC Towers with the release of a very special World Cup Football Betting System that you can download totally for FREE!

This system is based on our successful ‘Fink Tank’ method, which during the 2010 World Cup, made a 33% Return on Investment from 32 bets. In this free guide you can learn how to run the system in 6 easy steps and how to pick out the best value bets for every single fixture at Brazil 2014!

As a further bonus – all who download our World Cup System will also receive details of a 10% discount code to save you money if joining the Smart Betting Club.

This free World Cup System is not all we are giving away as before the tournament starts itself, we will also send on the ratings and qualifying bets for each of the first set of group fixtures – to help you follow this system that bit easier!

Early Retirement Thanks To One Tipster