With the PDC World Darts Championship approaching the SBC commissioned this article from one of our Hall Of Fame stalwarts, Richard Anderson of the OnTheOche darts tipping service. Below, he discusses the intricacies of darts betting, the key concepts and some pointers for beginners to this growing betting market. SBC members can trial OnTheOche for free for 30 days. With this headline event approaching, now is the perfect time to hit the bullseye with this service which boasts a profitable 16 year record with ROI figures above 13%!

My name is Richard Anderson and I’ve been running the successful OnTheOche darts tipping service since 2007.

I started betting on darts over 20 years ago. I competed at a reasonable standard back in the late ‘90s and would often play against the top players of the day in county games and in local open events.

Knowing the players so well gave me an advantage and led me to having the occasional bet down at the local bookies when they went on to play in tournaments broadcast on TV. While I didn’t really understand betting odds properly at the time, I knew enough to disagree with the compilers about the odd matchup and which player should be favourite. That was my starting point. I got interested and I have been betting on darts ever since!

An evolving sport with opportunities to profit

In those early days there were only three or four tournaments a year you could bet on. Over the years, more and more tournaments have been added to the calendar as the popularity of the sport has skyrocketed. Nowadays, you can bet on darts virtually every day of the year should you so wish.

Darts is, in my opinion, a great betting niche. It’s a popular enough sport so that the markets are a good size. You are able to get a decent bet on. Liquidity on the exchanges is good, particularly close to game time as it’s tailor made for in-running trading with matches having so many volatile swings in momentum.

But… darts is also under the radar enough that the bookies don’t really have a full handle on things outside of the top players.

My edge primarily comes from knowing more than the market about lower ranked and newer players to the tour.

Data plays a huge part in darts betting. This is particularly true since 2017. Pre-2017, only match results were available for the PDC ‘floor’ events that make up the majority of events on the Pro Tour (and are not shown on television). There was no way of knowing how the players performed in those matches.

That changed in 2017 when the PDC started using scoring software called ‘DartsConnect’. This meant every dart, thrown by every player, in every PDC competition was now publicly available.

The darts markets changed overnight and they are now driven by a player’s underlying statistics, much like xG in football or driving and putting data in golf. In today’s darts markets, performance data drives market moves much more than match results do.

Therefore, to succeed, a thorough database of up-to-date statistics is an absolute must to understand how and why the markets are pricing players how they are. There is a LOT of darts played around the world so it can be a time consuming process (my personal database has well over 600,000 rows of data for 2022 matches alone!). But, without it, you would be out of the loop – it is a must-have!

Some things are more difficult to measure

Darts is a very simple sport – you either hit your target or you don’t. In theory, once you have a big enough sample size of how regularly each player hits the target it should be easy (both for you and the market) to be able to calculate an accurate price for every player.

However, the great thing about darts from a betting point of view is that there is also a very human element to it that makes it much more unpredictable than it appears on paper.

Not all players are created equally. A huge part of top level darts is about being able to keep yourself calm and throw your normal throw at an important moment.

Adrenaline in most sports is a useful thing, in darts it is the last thing you want. You want a steady hand, a regular heart rate, calm breathing and a clear head – all while you are trying to accurately throw a sharp stick at a tiny target to win tens of thousands of pounds!

Some players have incredible numbers on the off-TV floor events but never win a big event as they cannot throw to their ability under pressure. Some players have floor numbers well outside the top 16 but are multiple time major winners as they have the bottle (for want of a more sophisticated word!) on the big stage.

Profitable darts betting is therefore a good mix of both numbers and knowledge/research.

In many ways darts is the ultimate sporting meritocracy. If a player has the ability and temperament to win matches then there are very few barriers to entry to them becoming a top player.

No expensive equipment or coaching is needed. No teammates, coaches or scouts to rely on. You don’t have to be a peak physical athlete. You can be a man or woman, young or old. And if you’re good, then you can quickly rise up to be playing in major events for major money within a few months of joining the Pro Tour.

In 2016, Rob Cross was an electrician playing in his local events. In January 2017, he won his tour card at Q-school and was World Champion by December.

This year, a 21 year old kid, Josh Rock, was a complete unknown when he won his tour card in January and is now the 5th favourite for the World Championship  (I cannot resist mentioning that OnTheOche members have a 250/1 ante post bet on Rock from earlier in the year so fingers crossed he can follow in the footsteps of Cross!).

From a betting point of view, that means there is an ever-changing cast of players to bet on. New players come along regularly so there are always fresh matchups to provide value opportunities.

I only bet on darts, no other sports, so I have the time to specialise and ‘dig deep’ on players so together, we can take advantage before they become too well known!

From a psychological point of view, darts can be a surprisingly dramatic sport to bet on.

There is an often agonising pause between a player throwing for double and finding out whether they have hit it or not. It is a very satisfying feeling seeing the dart hit, sealing you a big win!

On the other hand, it is a rough feeling watching a player you’ve backed have 3 darts at a double to win the match and put all 3 of them just the wrong side of the wire. Their opponent will then inevitably nail the same double with their last dart in hand to win it instead!

It is by its very nature a game decided by millimetres.

Wishing you the very best with any Darts bets you place!

Richard Anderson
On The Oche

FYI: If you’d like to try out OnTheOche during the upcoming World Championship, there is an exclusive 30 day trial available for SBC members – all part of the many special deals we negotiate on your behalf once you join the club!

If you are new to darts betting, the glossary table below explains the main markets: 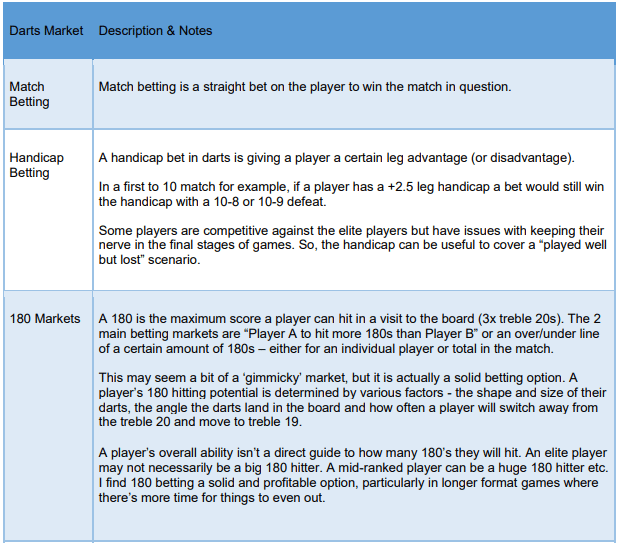 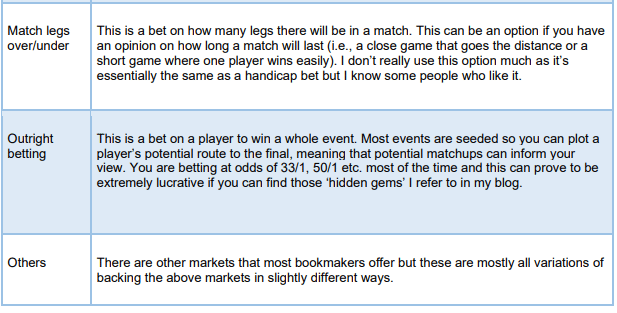 Early Retirement Thanks To One Tipster